When shopping for gemstones, you are faced with an array of amazingly diverse choices, with as many different colors, cuts, treatments and countries of origin to choose from as there are individual preferences. The easiest way to assess a gemstone’s desirability is to use their defining criteria. After all, a gem is only a gem when it is beautiful, rare and durable.

There are already two Zultanite® buyer guides on eBay - both are a good collection of facts, but contain little in the way of tips for the buyer. Read on to learn what to consider when purchasing Zultanite®, one of the world’s rarest and most beautiful gemstones.

This guide is very detailed, so a quick summary checklist for purchasing Zultanite® follows:

Beautiful, ethical, natural and rare, Zultanite® is the color changing variety of the mineral diaspore (an aluminum hydroxide), discovered in the Ilbir Mountains in the Milas county of Muğla in southwestern Turkey. Zultanite® contains traces of iron, chromium, titanium and manganese, and while it’s believed that manganese is responsible for its color changing ability, the other trace elements present may also play a role.

A Gem That Changes Color?

Actually seeing Zultanite® change color is dependent on several factors, including the intensity and purity of the light sources, your eyesight, pleochroism (different colors visible from different viewing angles), time of day, and even the weather. Due to ambient lighting reducing the purity of each light source, standing under kitchen fluorescents with a cigarette lighter is probably not the best viewing environment. Instead, observe Zultanite® for 24 hours in a variety of different lighting situations to experience the wonderful variety of colors displayed.

What’s In A Name?

Zultanite® is named in honor of the 36 Sultans who ruled the Ottoman Empire (1299 - 1923). The new name was to differentiate Zultanite® from non-gem quality diaspore as well as color changing diaspore mined before 2005. As a registered trademark, only the owner or licensees can use the ‘Zultanite®’ name to market Turkish color change diaspore. Transparent diaspore mined before 2005 is called Turkish diaspore, color change diaspore or simply, diaspore. Interesting, but what does this mean?

On eBay you’ll see both Zultanite® and diaspore for sale. While all Zultanite® is diaspore, not all diaspore is Zultanite®. Unfortunately, disapore mined prior to 2005 is often heavily included and cut in a manner that poorly captures its inherent color change. On the other hand, Zultanite® is cut by some of the world’s most experienced lapidaries to optimal proportions, thereby maximizing beauty. Choosing to buy diaspore over Zultanite®, could land you with an inferior gem.

For peace of mind, the authorized distributor ZULTGEMS includes the Zultanite® Authenticity Guarantee with every Zultanite® gem sold. This plastic card with an embedded hologram verifies each genuine Zultanite® to be of entirely natural origin, ethically mined with environmentally safe techniques and never enhanced. If a Zultanite® doesn’t come with this card, then it may not be real. Obviously, independent laboratory certification (e.g. GIA Report) can indicate authenticity, but this alone does not verify Turkish diaspore as genuine, legally mined Zultanite®. Note that appraisers price Zultanite® in the same way they value brand-name gemstones because Zultanite® is mined by a single company.

The beauty of Zultanite® lies in its contrasting colors, which change from kiwi greens with flashes of canary yellow under sunny skies, to rich champagnes in traditional indoor lighting and raspberry hues in candlelight. With 90 percent of all standard gemstones being only red, green or blue, Zultanite® stands out as a unique and limitless alternative.

Unlike other color changing gemstones, Zultanite’s color change is not limited to two basic colors. Its colors can also be seen from different angles due to pleochroism (different colors visible from different viewing angles) and a wide variety of other colors (e.g. canary yellow, cognac pink, ginger, kiwi green, raspberry pink, rich champagne and sage green) may occur in different lighting. Like all gemstones, the larger the Zultanite®, the more striking the color change and the greater its color intensity.

Compared to other color changing gemstones, Zultanite’s light sensitivity affords far more nuances and subtleties, which are very appealing. As a result, Zultanite® fairs much better in mixed lighting (environments with multiple different light sources) than other color changing gemstones, plus the very nature of its colors suit a wider variety complexions, fashions, personalities and styles.

The clarity and cut of gemstones hugely impacts their beauty.

A gemstones’ clarity is determined by the amount and location of inclusions (any type of material that is not part of the original mineral being found inside it). Clarity grading in colored gemstones is based on the eye-clean standard, no visible inclusions when the gem is examined approximately 6 inches from the naked eye. While Zultanite® is classified by the GIA (Gemological Institute of America) as a Type II gemstone (gems that typically grow with some inclusions that may be eye-visible), it is usually eye-clean with some inclusions visible under 10x magnification. With eye-clean clarity the marketplace standard for Zultanite®, gem-quality diaspore with eye-visible inclusions should be heavily discounted. Note that ZULTGEMS, an authorized Zultanite® distributor, only supplies faceted Zultanite® eye-clean.

Zultanite® tests the skills of even the most experienced lapidaries due to its very low yield (2 percent), tendency to cleave, or split apart, in a single direction (much like a Diamond) and its trickier-than-usual crystal orientation. The rough must be oriented to correctly optimize the color change and to minimize the possibility of any cleavage damage during polishing. When assessing the cut of Zultanite® consider the following:

• Even, uniform color with no distinct zoning, remembering gems are designed to be viewed from the table down.
• Strength of color change.
• Balance, symmetry and proportion.
• Acceptable crown height and pavilion depth. For Zultanite®, the crown versus the pavilion ratio is usually one third to two thirds.
• Acceptable brilliance.
• Eye-clean clarity (no visible inclusions when the gem is examined approximately 6 inches from the naked eye).
• A good polish condition, with no eye-visible scratches or polishing marks.
• Acceptable pavilion bulge and girdle thickness.
• Acceptable sharpness of the facet junctions.
• The majority of the gem’s weight is visible from the top.

Most Zultanite® rough yields the popular jewelry sizes of one to three carat gemstones - sizes exceeding 5 carats are extremely rare and result in exceptional price increases. A wide variety of classic and specialty cuts are available. No one shape is inherently better for Zultanite® than another - it is simply down to personal preference.

Only found in one mine in Turkey’s Anatolian Ilbir Mountains, Zultanite® is one of the world’s rarest gemstones. The Zultanite® mine is located in the Kucukcamlik and Buyukcamlik hills at a remote location 4,000 feet above sea level. The nearest villages with road connections are Pinarcik and Selimiye, which are approximately 12 kilometers from the mining area.

As a single mine gemstone, Zultanite’s genuine rarity is undeniable. Other factors that accentuate its rarity include:

• Natural color changing gems are extremely rare.
• With over 90 percent of gemstones treated in some way, gemstone enhancements are prevalent in the marketplace and significantly impact a gemstone’s value. Zultanite® is one of the few natural gemstones that are not enhanced or treated in any way, adding to its rarity and value.
• Only 50 percent of all Zultanite® mined is suitable for faceting and up to 98 percent of the raw crystals are lost during the cutting, or lapidary, process. Zultanite’s low yield accentuates its rarity, particularly when the return of rough on most gems is usually between 20 and 35 percent.
• Only commercially mined since 2006, Zultanite® is a true marketplace rarity.
• Ethically mined with environmentally safe techniques, Zultanite® has a positive impact on the lives of its miners and the surrounding community.

Beautiful, rare, always natural and ethically mined with environmentally safe techniques, Zultanite’s characteristics make it an excellent jewelry gemstone. With a hardness similar to Quartz gemstones (Mohs’ 6.5 - 7), Zultanite® has very good wearability and durability, typically posing no problems for any jewelry setting. As with all gemstones, Zultanite® will only have lasting beauty with proper care.

While Zultanite® is well-suited to everyday wear, avoid doing anything that risks impact, exposure to chemicals, heat or extreme temperature changes. Always store Zultanite® carefully to avoid scuffs and scratches. Clean with gentle soap and lukewarm water, scrubbing behind the gem with a very soft toothbrush as necessary. After cleaning, rinse with lukewarm water and pat dry with a soft towel or chamois cloth. Never steam or ultrasonic clean your Zultanite®.

While eBay is a safe buying environment, ZULTGEMS reports that manufactured color change glass is being deceptively sold as Zultanite® by some unethical Turkish jewelers who target tourists. Apparently this is so prevalent that ZULTGEMS actually advise people against purchasing Zultanite® from Turkey - there are simply too many fakes in this marketplace.

Zultanite® could potentially be confused with Peridot due to the strong doubling of the back facets, but Zultanite’s daylight color is much lighter and it has a higher refractive index. While a synthetic color change glass manufactured in India, Alexite, and another synthetic glass developed by a major glass manufacturer, Zandrite, are occasionally confused, Zultanite® is again differentiated by its higher refractive index and double refractivity.

As a natural gemstone, Zultanite® has an intrinsic value based on its genuine rarity, whereas manufactured glass is simply a cheap imitation. Occurring entirely by chance, gemstones like Zultanite® truly are amazing miracles of nature. On the other hand, imposters from the factory like Alexite are not rare as they are manufactured. Color change glass is not a gemstone and should not be sold as such.

Appointed an authorized Zultanite® distributor in 2010, ZULTGEMS use designer collaborations, popular shopping destinations, retail partners and home shopping networks to raise the gem’s profile in the US and Europe.

Appearances in the pages of InStyle, British Vogue and The Hollywood Reporter as well as on popular television programs including ‘Dancing with the Stars’ and ‘The Housewives of Beverly Hills’ has given the general public a taste for this exotic gemstone.

Thank you for reading this buyer guide on Zultanite®, one of the world’s rarest and most beautiful gemstones. Please contact us with any questions you might have on this phenomenal gemstone. 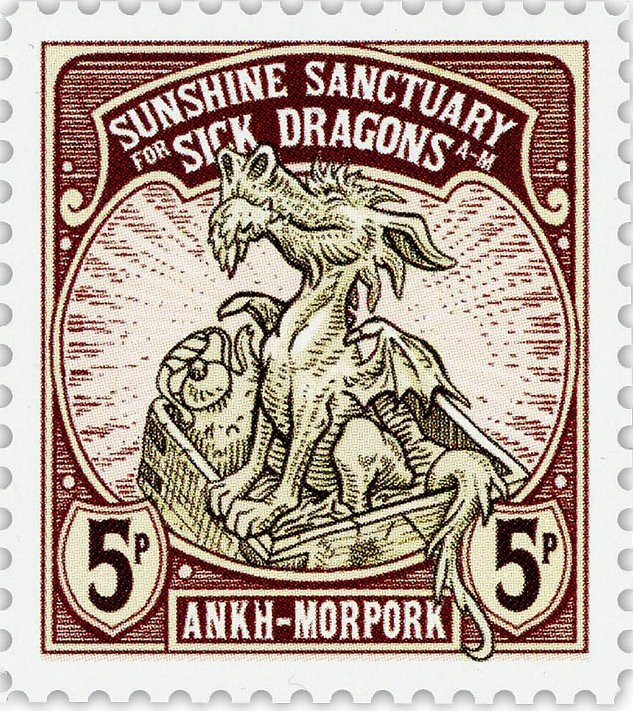 Discworld Stamps - What are they?